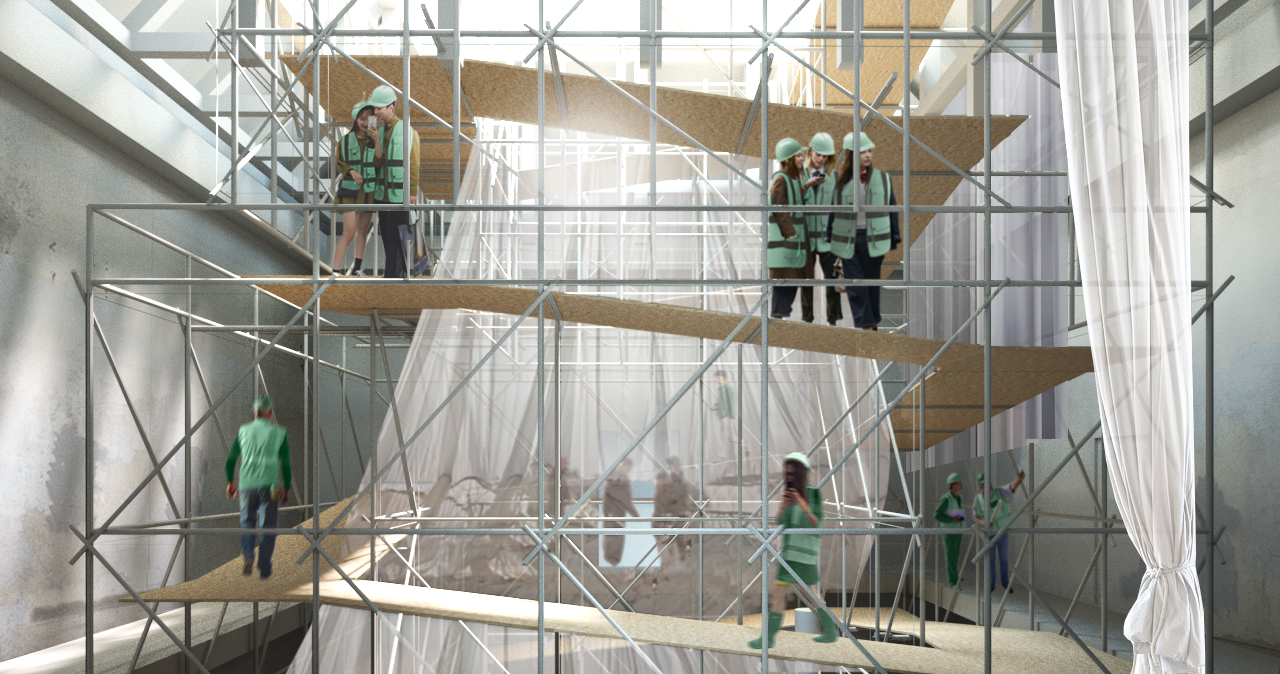 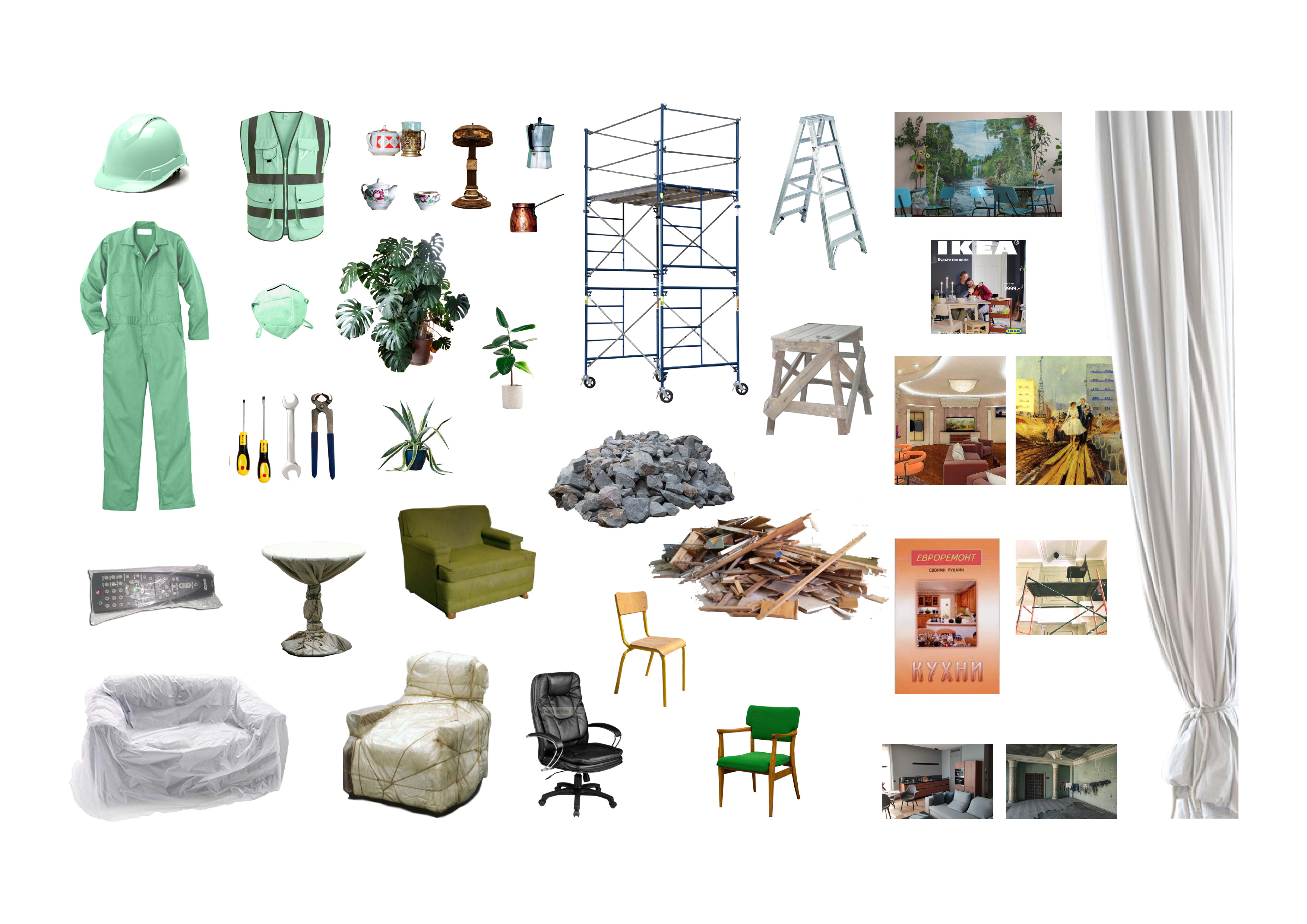 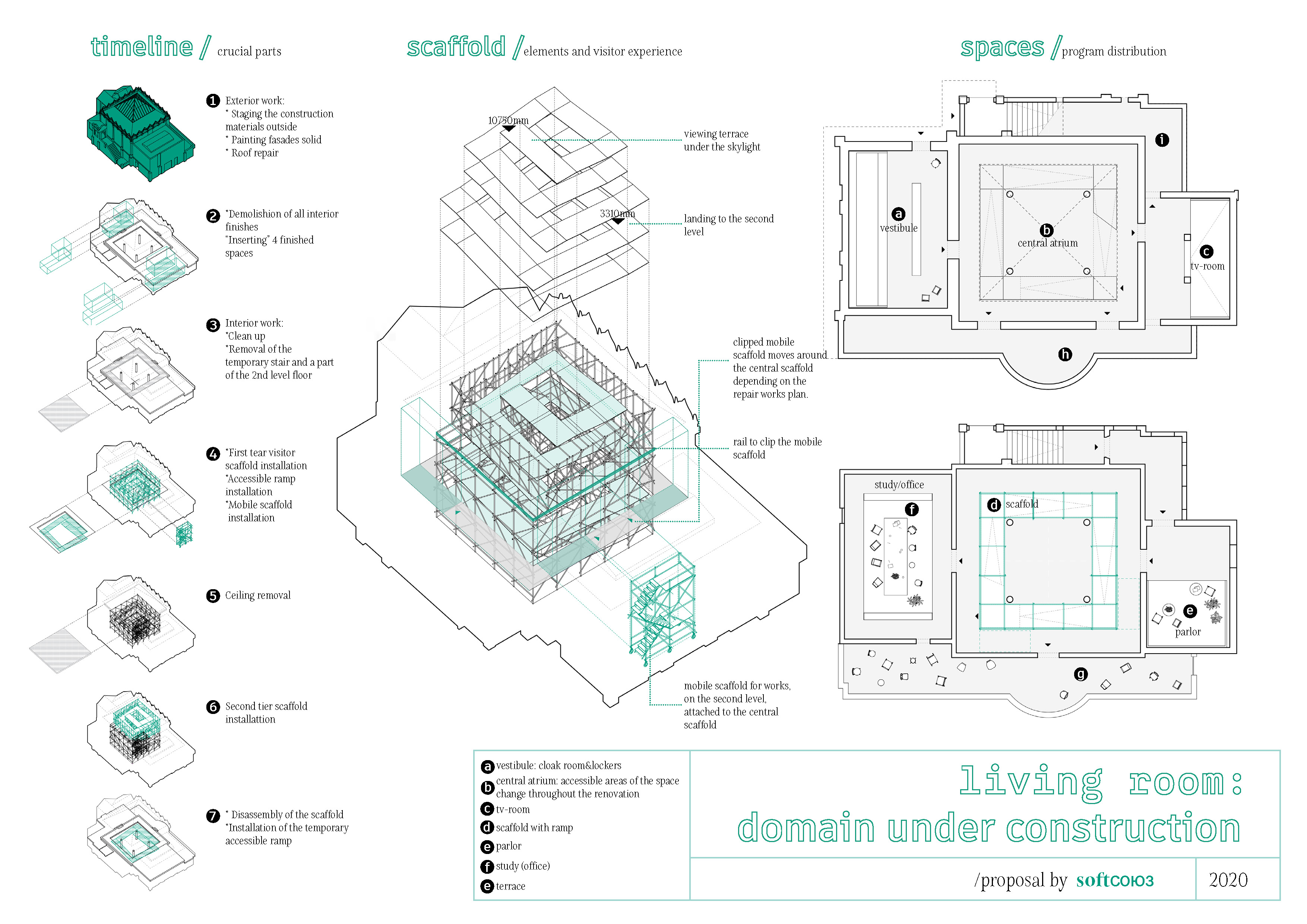 There is a saying in Russia that “repair never ends, it is only suspended.”Living Room: Domain Under Construction leverages the opportunity of the Russian Pavilion’s renovation to tell a story about the unique role that repair practices have in Russian identity, culture, and politics. The goal of Living Room is to introduce a human scale to planetary-scale affairs and to use the cultural process of home repair in Russia as a prism for reflecting on our collective future: how we live together.

Living Room is an immersive experience of a house under repair and a spectacle of ongoing reconstruction within the Russian Pavilion. This proposal will focus on the interior condition of the building as a conceptual framework for a Russian context. Spaces of the building will represent three conditions: projected futures, ongoing repairs, and finished states. The assemblage of scaffolds, construction textiles, lighting, tools, plywood platforms and construction uniforms will coincide and interfere with the ‘inserted’ finished and complete states of cloak room, parlor, office and the tv-room. Clean, outlandish, whitewashed plywood structures-- akin to sales offices at the construction sites -- will be muddled by the projected futures and ongoing repair. The artifacts of the ongoing repair, yet to be removed or installed will sporadically migrate across the pavilion as reconstruction unfolds. The projected futures: in the form of images and films, portraying the domestic repair, will be projected onto construction textiles and walls, printed and framed. They will share stories about Russia’s major housing construction projects that have happened in the past leading up to major projects moving forward in Russia today with an emphasis on the voices of the people who live in these places.

To underline this effect, the Russian Pavilion will be outfitted with an assemblage of domestic items: furniture, textiles, building materials pulled from a variety of domestic spaces in Russia from a wide range of temporalities. Photographs of kitchens, bedrooms, bathrooms, and living rooms in homes from around Russia will be on display. Footage of interviews with people that are in the process of renovating their own homes will be shown, conducted by a sociologist within the team. The central area within the building will be the primary site of reconstruction: a centerpiece made of scaffolding to deliver visitors to the space under the central skylight.

Home repair has a special role in Russian identity, culture, and politics. The repair of the home is a cultural trope that represents generational changes in lifestyle and values. It repeats itself memetically at several intervals throughout the 20th century up into the present day where Russia is entering a new phase in its history. The act of changing one’s domestic space is considered to be an individually symbolic act and is practiced collectively across the country. Home repair is a break from the past and a means for the construction of a new future.

Evroremont (translated into English means “European repair”) for example, was an interior design movement in the 1990’s characterized by people from around Russia retrofitting their Soviet-era apartments with “European” design elements: plaster ionic columns, floral patterned wallpaper, and ornate plastic chandeliers. Evroremont represented a break from the Soviet period into a new, ambiguous one for the individual homeowner : a strange postmodern transition reflected by the clash between Soviet and capitalist kitsch aesthetics. Evroremont was the construction of a new social image for people, a reflection of how people wanted to be seen by others and how they saw “Europe”. Today, Evroremont aesthetics are widely being replaced with a more austere language. Ikea furniture complemented by generic, white-washed interiors are most popular for the newest generation of homeowners in Russia that want to move away from the aesthetics of the 1990’s appreciated by their parents.

Home repair for the average person in Russia is however not typically under the purview of professional architects. The task is not considered a very glamorous or artistic endeavor for designers. Home repair is carried out instead by the people living in the unit. It is a very personal decision making process that the individual has control over as opposed to the country-wide scale in which design decisions are typically made by central authority. Home repair reveals the multiplicity of narratives within society as a whole, in contrast with one grand vision for the country’s future. The exteriors of people’s homes can be static while the interiors are constantly in-flux, an assemblage of contemporary life theatrically played out through domestic repair.

Living Room seeks to insert these narratives within the Venice Biennale’s overall theme of living together to open the discussion of how we are going to live together in the process of perpetual reconstruction. This is an appropriate approach given the Russian Pavilion’s own current renovation and it’s original function to serve as a prototype for a typical Russian embassy, a symbol of home in a foreign country. Living Room will leverage the opportunity of the Russian Pavilion’s renovation to share with visitors these cultural components behind domestic repair in Russia to foster an environment that will open discussions about our collective future like how friends would in their own homes.